NEW YORK/PORT-AU-PRINCE, JULY 29, 2022—Doctors Without Borders/Médecins Sans Frontières (MSF) teams at the emergency center in Turgeau in Port-au Prince, Haiti have treated almost 80 people with gunshot wounds—mainly from stray bullets—since last weekend. This is the result of escalating fighting between armed groups that has spread to new areas of the capital, said the international medical humanitarian organization on Friday.

This most recent wave of violence follows the fighting that broke out in the Cité Soleil neighborhood of Port-au-Prince earlier this month, leaving thousands of people trapped without drinking water, food, or medical care.

“These 80 patients only represent a small number of the victims,” said Rachelle Seguin, medical coordinator for MSF in Haiti. “Moving around has become extremely dangerous in several areas of the city. Many people are trapped in their neighborhoods. This has made access to health care very difficult. MSF is organizing mobile clinics to reach the people who can’t move, but even our medical teams face difficulties; at least three times, our mobile clinics had to be postponed or cancelled because of the fighting.”

In the neighborhood of Cité Soleil, an MSF mobile clinic reached the area during a ceasefire. In a few hours, MSF’s medical teams carried out 150 consultations—30 of which were for people with infected wounds, meaning these were old wounds that weren’t treated before. This is likely because the wounded couldn’t get medical help, either because of the intensity of the ongoing fighting or because armed groups have erected roadblocks and barricades. In some areas, MSF can only treat patients in basements or windowless rooms because of the dangers of crossfire and stray bullets.

Since the increase in violence in several areas of Port-au-Prince—whether it’s in Cité Soleil, Martissant, or, most recently, Bel Air, Bas Delmas, and the fringes of the city center—MSF has observed a decrease in outpatient consultations.

“The people of Port-au-Prince must be spared from the violence and must have access to health care and basic services,” said Benoît Vasseur, MSF head of mission in Haiti. “We’re very concerned that the conflict zones in and around the Haitian capital keep spreading.”

All parties involved in the recent clashes must allow aid to enter affected areas, ensure the safety of civilians, and allow people to access health care and basic services, said MSF. 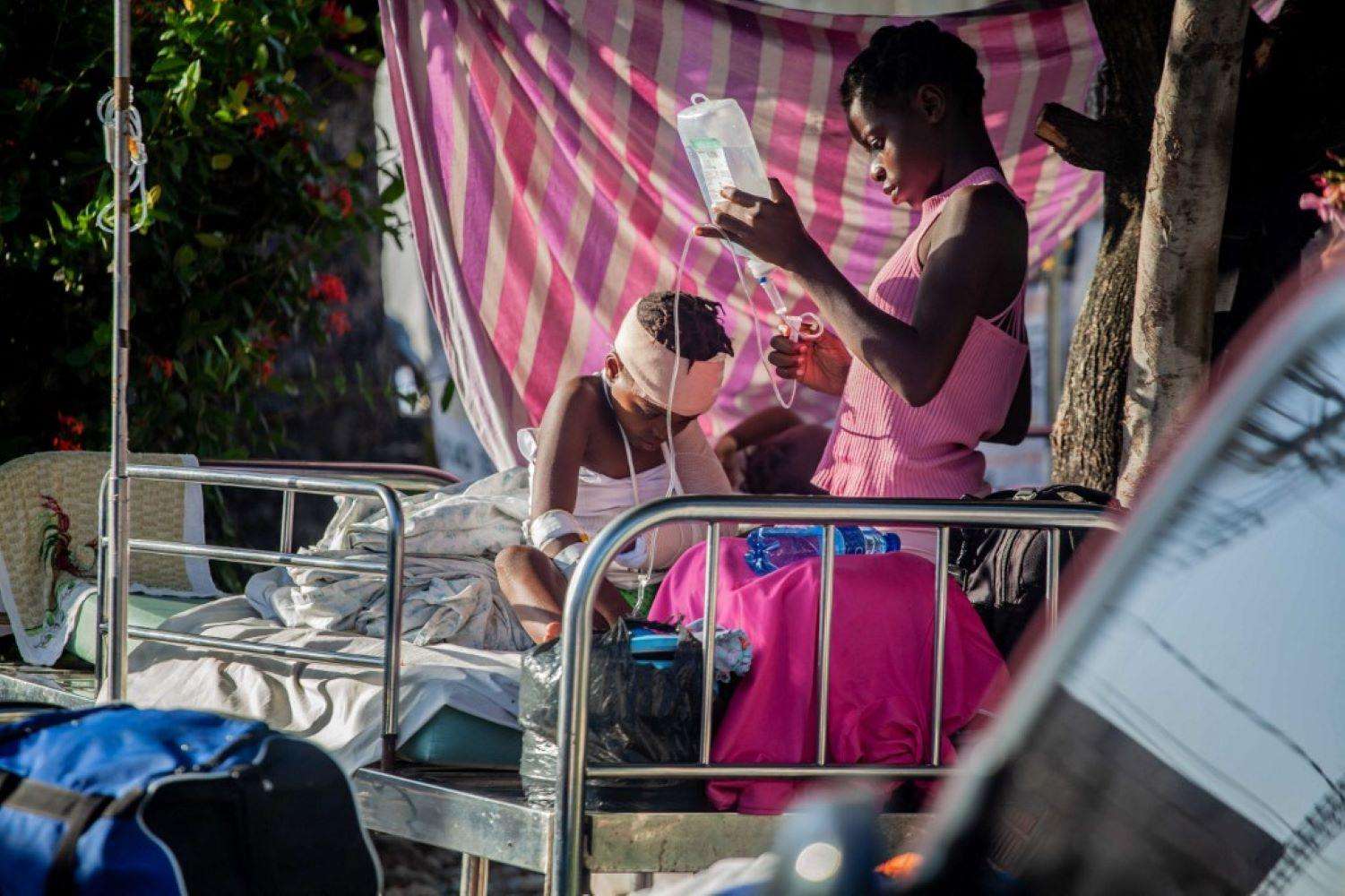 In response, Doctors Without Borders/Médecins Sans Frontières (MSF) has been supporting hospitals and clinics with staff, supplies, reconstruction, and water and sanitation services. At hospitals in Les Cayes, Jérémie, and Port-au-Prince, MSF has provided surgical and post-operative care to 230 people with severe injuries from the earthquake.

“Many of our hospitalized patients have now been discharged and are receiving follow-up care as they continue their rehabilitation,” explains Raphaël Torlach, MSF emergency coordinator in Les Cayes. “We are helping patients with transportation and lodging so they can attend their appointments, because some live far away.”

At the Immaculate Conception Hospital in Les Cayes, the number of patients arriving in the emergency room and the number of surgeries remain very high. An MSF medical team works together with the hospital’s staff to treat patients in the emergency, surgery, and post-operative wards, while also supplying medication and equipment.

“Nearly 50 patients are still hospitalized in the hospital wards we support,” Torlach says. “They include earthquake survivors with severe injuries but also patients with other traumatic injuries.”https://www.youtube.com/embed/OJeyHvDbR40?autoplay=0&mute=0&enablejsapi=1&origin=https%3A%2F%2Fwww.doctorswithoutborders.org

In Port-a-Piment, the earthquake severely damaged a public hospital where MSF has provided sexual and reproductive health care for years. Medical services were initially moved outside to tented areas, and MSF renovated its logistical base in Port-a-Piment to provide a space for MSF and hospital staff to treat patients safely.

The OFATMA Hospital in Les Cayes was also badly damaged in the earthquake. Working along with hospital staff, an MSF medical team is preparing to manage pediatric and neonatal care in hospital tents. MSF is also building and equipping a delivery room and providing tents for pre-and postpartum care.

To reach people in isolated areas of Haiti’s Sud department, MSF organized mobile clinics along the southern coast and in the mountains, as well as in displacement camps in Les Cayes. The mobile clinic teams—with a doctor, nurses, health promoters, and often a psychologist—have carried out more than 7,300 patient consultations so far, providing primary health care and mental health services.

With time, the number of patients with earthquake-related injuries has decreased, but many people have ailments related to poor sanitation and living conditions, such as skin lesions, acute respiratory infections, parasites, gastritis, and genital and urinary tract infections. Patients with severe conditions are referred to functional health facilities for care. These include malnutrition, infected wounds and abscesses, pregnancy complications, unmanaged chronic conditions, and post-traumatic stress disorder.

This week, MSF will finish distributing 5,000 kits of relief items to villages and displacement camps in the Sud department.

“We . . . put a big focus on ensuring water supply for the community for the longer-term, with the repair of water infrastructure.”

“While we responded to the immediate needs with water trucking, installation of water bladders and an emergency surface water treatment plant, we also put a big focus on ensuring water supply for the community for the longer-term, with the repair of water infrastructure,” said Sadie St. Denis, MSF emergency coordinator in Nippes.

Fifteen years ago, Centre County District Attorney Ray Gricar took a day off from work, set out on a scenic drive, and was never seen again. Authorities later found his car and his laptop, with its hard drive removed and discarded elsewhere, but the mystery of Gricar’s disappearance remains unsolved. On the night of September 11, 2001, Michele Harris of Owego, NY, seemingly faded. Her van was found parked at the end of her family’s driveway. She was in the process of a bitter breakup from her wealthy spouse, Cal Harris, the owner of many local car dealerships. Michele’s body has never been found. Her husband was tried four times for her death. The jury convicted him in the first two trials, but both verdicts were thrown out. The third trial resulted in a hung jury. In the fourth trial, Cal Harris was vindicated.

Doctors Without Borders/Médecins Sans Frontières (MSF) provides vital medical and mental care for refugees trapped on the Greek island of Lesbos. MSF midwife Eleonora Selmi is part of the team responding to the threats presented by the new coronavirus. Originally from Italy—among the countries hardest hit by the pandemic—she describes what it’s like to be providing care far from home. “I feel part of this huge effort in every part of the world. And this is the most important thing because the virus doesn’t have limits and crosses all the borders. So does solidarity,” she says. MSF teams have been working in Lesbos since 2016 to care for refugees living in overcrowded and unsanitary conditions. They are now extremely vulnerable to the spread of COVID-19, the disease caused by the new coronavirus. We are calling for the immediate evacuation of those most at risk.

“The detention of this doctor is all the more preposterous as she is a medical professional committed to defend the right to health on the frontline in the fight against COVID-19. Instead, she is behind bars silenced for daring to criticize the authorities.

“Access to information is a key aspect of the right to health. Everybody has the right to be informed about ongoing response efforts. The failure to guarantee this right undermines the public health response and puts everyone’s health at risk.

“The Russian authorities must immediately and unconditionally release Anastasia Vasilyeva, whom Amnesty International considers a prisoner of conscience, and investigate the appalling behavior of the police during the arrest. They reportedly choked and hit her in the abdomen, making her faint.”

Anastasia Vasilyeva, her colleagues from the Alliance of Doctors union, and accompanying journalists were detained at the entrance to Okulovka, a village in Novgorod region (western Russia) on 2 April. The volunteers had brought masks and other protective equipment for medics at the local hospital.

They were charged with “non-compliance with the rules of conduct to prevent and liquidate an emergency situation” and later released. However, Anastasia Vasilyeva was not allowed to leave the police station and was violently dragged back inside. She was reportedly choked and hit in the abdomen and passed out as a result. A lawyer was denied access to her for about six hours. Anastasia Vasilyeva spent the night in police detention and is about to face trial on charges of “disobeying a police officer”.

On 31 March, Anastasia Vasilyeva was called to the Investigative Committee for interrogation in connection with her YouTube post where she called on doctors not to work without protective equipment.