Pakistan: Closure of MSF project in northwest will leave thousands without healthcare

Médecins Sans Frontières (MSF) has been told by the Pakistani authorities to close its medical activities in Bajaur Agency in north-western Pakistan. The closure will leave thousands of people in Bajaur Agency without vital healthcare, and comes just seven weeks after MSF was forced to close its project in Kurram Agency, also in the Federally Administered Tribal Areas (FATA). With the closure of its project in Bajaur, MSF will have no presence in the FATA, one of the areas of the country where the need for emergency, maternal and child healthcare is most acute.

“Healthcare services are very limited in the area and most of our patients cannot afford to pay for even basic medical care. As the only major hospital providing free, quality healthcare in the area, the closure of MSF’s activities will leave a major gap and have serious negative implications for the health of people living in Bajaur and the surrounding areas, such as Mohmand Agency.”

The Pakistani authorities have informed MSF that the no-objection certificate (NOC) required for carrying out medical activities in Bajaur will not be renewed, although no explanation for this has been given.

Without a valid NOC, MSF is not permitted to continue providing medical services. MSF has informed its team and the local community in Bajaur Agency about the decision, and will complete the closure process within two weeks.

In Bajaur, MSF has supported the Ministry of Health at the Tehsil Headquarters hospital in Nawagai since 2013, providing medical care in the outpatient, emergency room, and mother and child health departments. As the authorities have not permitted MSF international staff members to access Bajaur Agency, the project is run by 120 Pakistani staff with support from international staff based in Timergara in Khyber Pakhtunkhwa province and in Islamabad.

“The number of people seeking healthcare at Nawagai hospital has continued to increase, illustrating the enormous need for medical care in the area,” said Alocco.

“Since February 2017,  when emergency services at the hospital were extended to be open 24 hours a day, seven days a week, we have seen the number of patients treated in the stabilisation room more than double,” said Alocco.

“The end of MSF’s support will likely mean that people in need of life-saving emergency, maternal and paediatric care will face challenges accessing it, especially at night time when travelling is more difficult.” 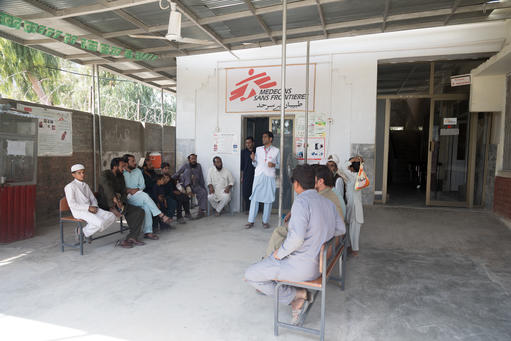 In 2016 MSF teams at Nawagai hospital conducted more than 31,000 outpatient consultations and treated 167 children for malnutrition. The teams also treated more than 800 patients infected with leishmaniasis, which is an endemic disease in Bajaur.

MSF manages support services in the hospital such as the laundry and infection control. Teams have also provided support, including medical supplies and training, to the Ministry of Health Khar Agency Headquarter Hospital for responding to mass casualty events.