Thomas Keller is renowned for his culinary skills

Thomas Keller is renowned for his culinary skills and his exceptionally high standards. He has established a collection of restaurants that set a new paradigm within the hospitality profession. He is the first and only American-born chef to hold multiple three-star ratings from the prestigious Michelin Guide, as well as the first American male chef to be designated a Chevalier of The French Legion of Honor, the highest decoration in France. He has received countless accolades, including The Culinary Institute of America’s “Chef of the Year” Award and the James Beard Foundation’s “Outstanding Chef” and “Outstanding Restaurateur” Awards. 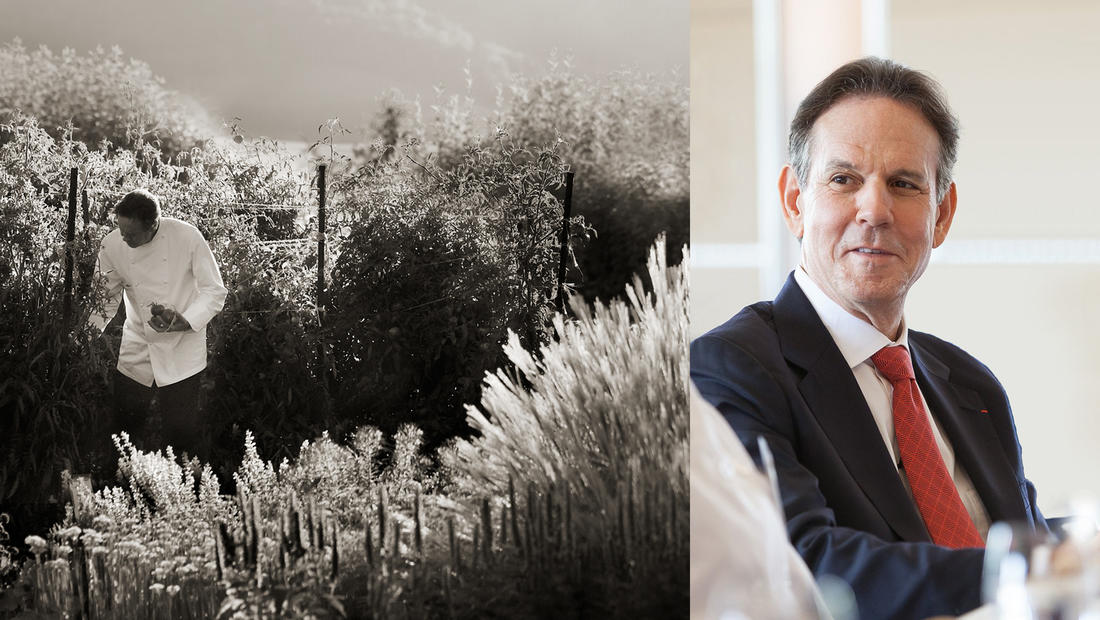 Keller began his culinary career at a young age, working in the Palm Beach restaurant managed by his mother. He relocated to France in 1983, where he worked in several Michelin-starred houses including Guy Savoy and Taillevent. He opened his first restaurant, Rakel, in New York City in 1986, then moved westward to California to work as the Executive Chef at the Checkers Hotel in Los Angeles.

In 1994, Keller took ownership of The French Laundry in Yountville, quickly garnering nationwide acclaim. The restaurant recently celebrated its 20th anniversary in July 2014, which is an accomplishment few American restaurants have achieved. To give the restaurant a backdrop worthy of its artistry and history, the first major design overhaul of the kitchen and surrounding grounds began in January 2015 and is currently underway. The restaurant is open during this renovation and operating out of a temporary kitchen constructed from four shipping containers. To keep his team employed during the transition from old kitchen to temporary kitchen, Keller hosted a pop-up restaurant, Ad Lib, at Silverado Resort & Spa in Napa Valley. The temporary restaurant was so successful, that it was open for nine months instead of 100 days as originally intended.

Valuing genuine collaboration, Keller has successfully assembled an expert staff that shares his philosophy and vision, enabling him to concentrate on his many varied interests, including his Napa Valley wine label Modicum and bi-annual lifestyle magazine Finesse. His relationship with All-Clad Metalcrafters is more than a decade-old, and includes collaborations such as the All-Clad Copper Core and the All-Clad Bocuse D’Or Cookware. Together with restaurant designer Adam D. Tihany, he developed K + T, a collection of silver halloware and cocktailware for Christofle Silversmiths. His collaboration with Raynaud and design firm Level has led to a sophisticated collection of white porcelain dinnerware called “Hommage.” He also consulted on the films Spanglish and Ratatouille, the latter winning the 2007 “Best Animated Feature Film” category at both the Golden Globes and the Academy Awards.

In August 2011, in collaboration with Lena Kwak, then the research and development chef of The French Laundry, Keller launched Cup4Cup, or “cup for cup,” a gluten-free flour blend that substitutes for all-purpose flour in home recipes. Distributed nationally at retailers like Whole Foods, Wegmans, William Sonoma and including Bouchon Bakery locations, Cup4Cup provides an alternative new ingredient to home cooks nationwide and continues Keller’s legacy of setting industry standards. In addition to the multi-purpose flour, new products include a pancake & waffle mix, brownie mix, pizza mix. The brand’s emphasis on innovation continues to bring new products. In January 2015 Keller and Kwak Introduced a nutrient dense, dairy and gluten free Wholesome Vanilla Cake to the Cup4Cup line of baking mixes.

In addition to the international and national acclaim Keller’s fine dining and casual dining restaurants consistently receive, including seven stars in the 2013 Michelin Guide, Keller’s personal influence on the culinary world has laced him among the most decorated chefs in the world. In 2001, Keller was named “America’s Best Chef” by Time magazine. In 2003, Johnson & Wales University conferred upon him the honorary Degree of Doctor of Culinary Arts for his contributions to the profession. He is consistently recognized by respected media outlets, the James Beard Foundation and The Culinary Institute of America (CIA), which recently honored him in 2013 with “TK Day at the CIA”—a day dedicated to culinary curricula of America. In 2010 he was elected to the CIA’s Board of Trustees, contributing his unique perspective and leadership to furthering the school’s educational mission.

In 2008, at the behest of Chef Paul Bocuse, he, along with Chefs Daniel Boulud and Jerome Bocuse, established the Bocuse d’Or USA Foundation where he currently serves as president. The Foundation is devoted to inspiring culinary excellence in young professionals and preserving the traditions and quality of classic cuisine in America. Chef Paul Bocuse’s dream was realized in January 2015 when Keller led Team USA to win silver, which was the first time the United States has ever placed on the podium.

On behalf of French President Nicolas Sarkozy, Chef Paul Bocuse presented Keller as a Chevalier of The French Legion of Honor in 2011 in recognition of his lifelong commitment to the traditions of French cuisine and his role in elevating cooking in America.

During the summer of 2013, Keller opened his first retail store in Yountville offering an array of hand-selected kitchen tools, apparel, gifts and accessories. As with Keller’s menus, the product selection changes seasonally but staying true to Chef ’s Essentials, Garden Essentials, Pastry Essentials and restaurant keepsakes.